That first one, really wasn't much of teaser. Barely enough to get you interested. I'm hoping that this video helps to stir the curiosity a little more.


In the teaser above we are looking at an mp3 file. This teaser lightly highlights the visualization, hex display searching, text selection, and strings features.

Here are a couple of screen captures from the video: 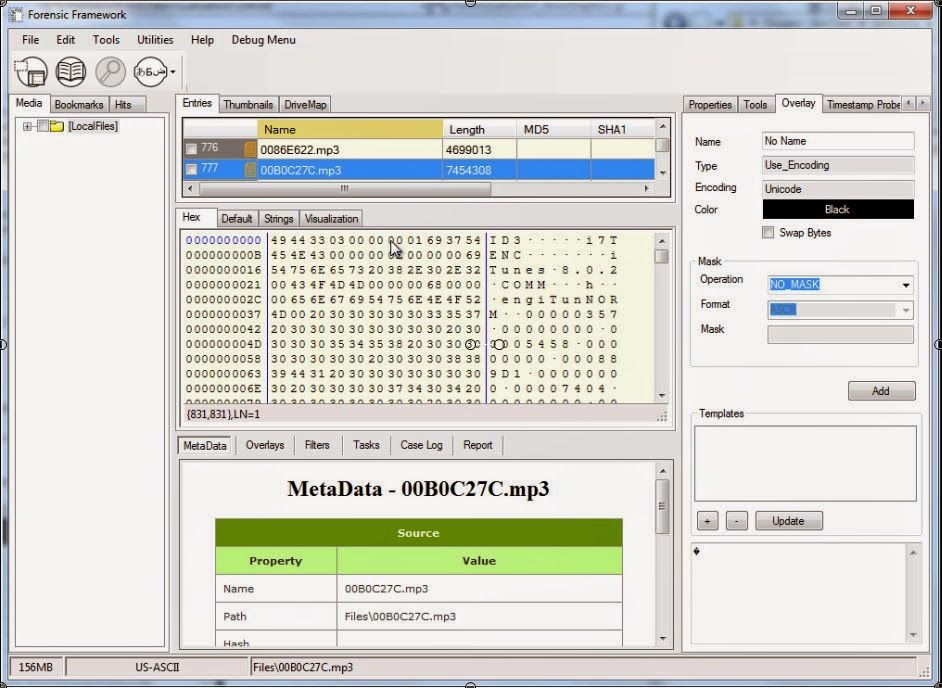 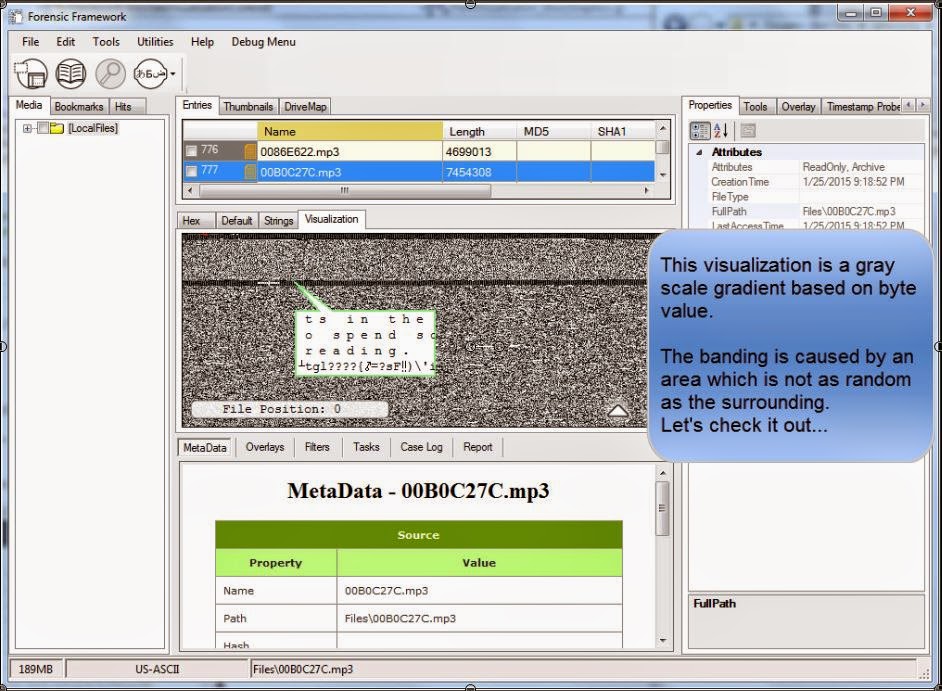 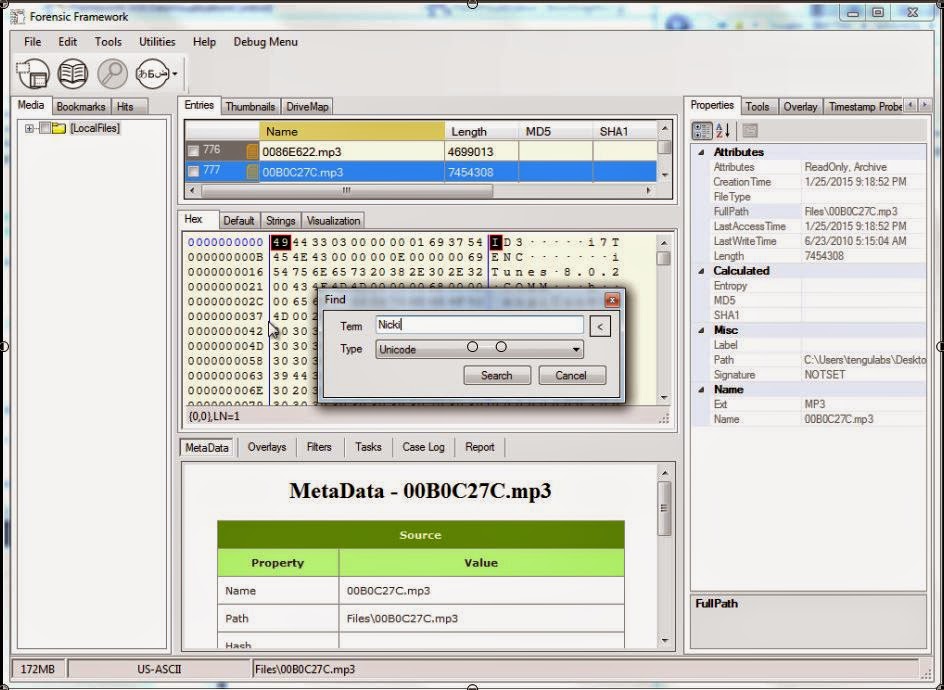 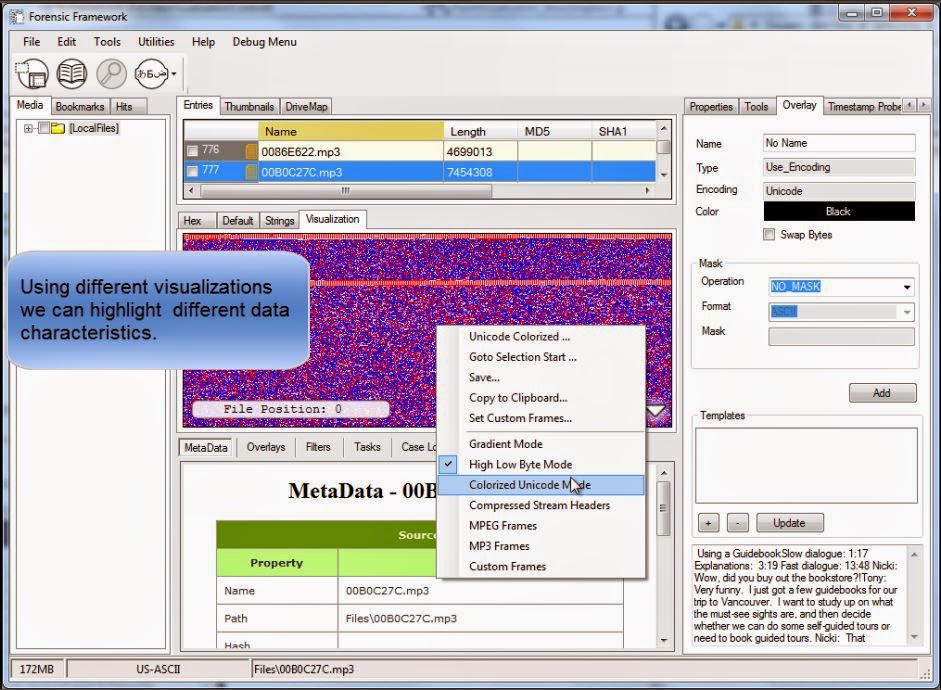 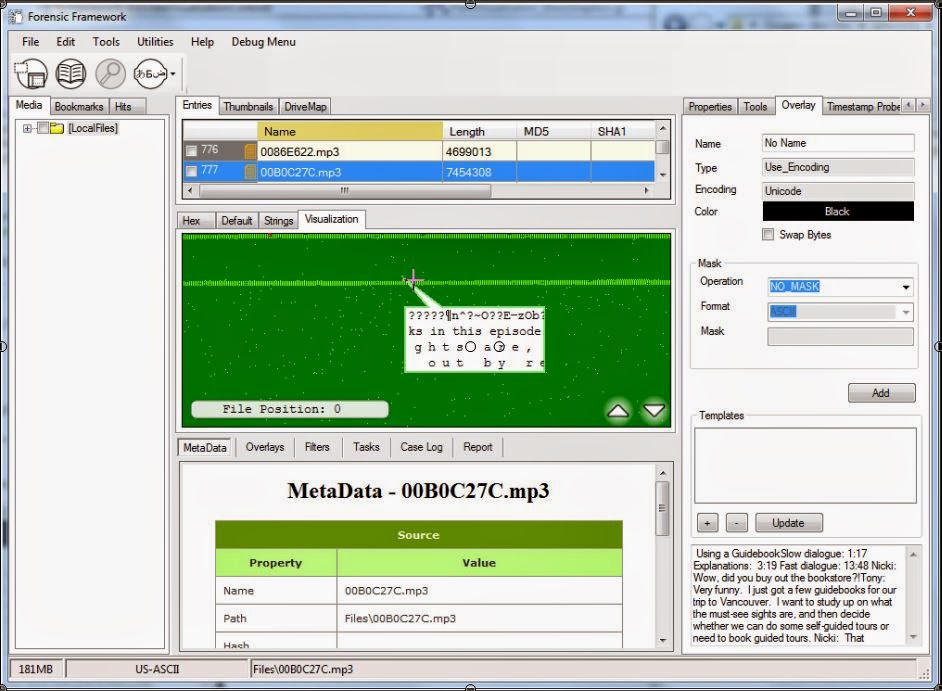 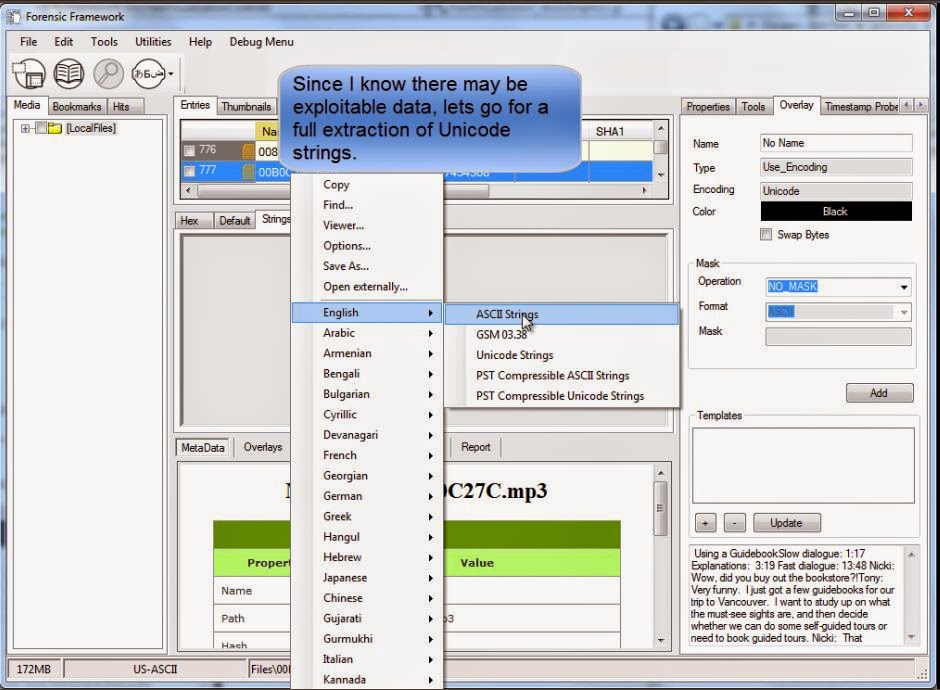 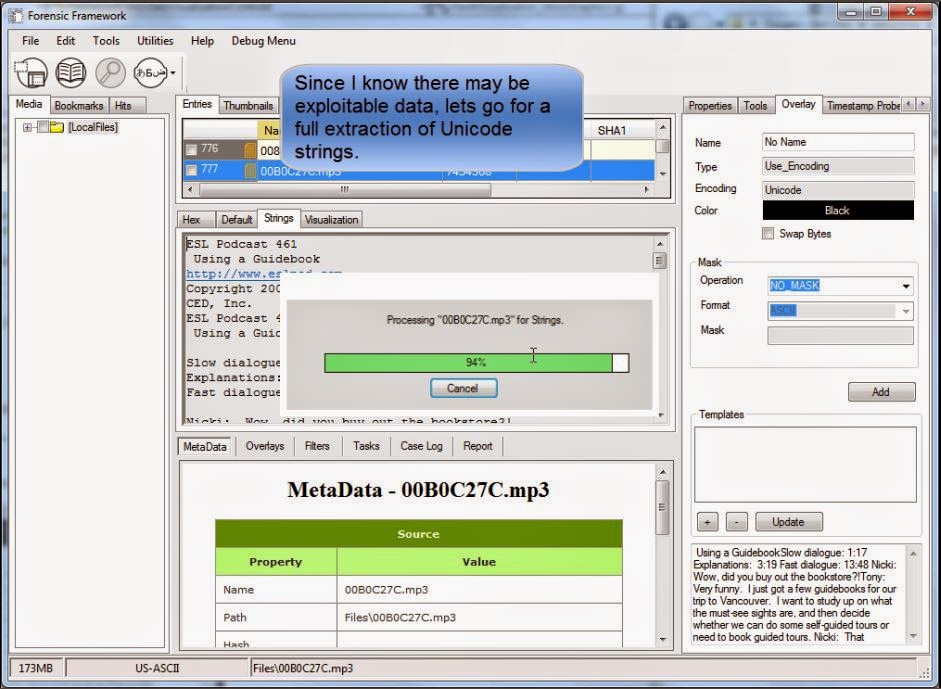 I've been working a forensic application for quite a time now. More time than I would like to admit; as work called me away, life interrupted, or my interest waned for a period of time. It has mainly been a testing ground for my ideas, and frustrations .. when whatever main stream tool I was using failed or crashed.

I'm publicly referring to it as the generic name "Forensic Framework" as I decide whether I'm going to commercialize it or not. Here is the crash list of features. I'm sure I've overlooked a couple. I have made the attempt to line it up under existing, partial/in-progress, or planned. Not a finalized list; it may undergo some shifting later as I shake out the broken bits, or as features get pushed down in favor of others.

I’ll have a follow up post with pictures later. I’m working on a clean up of the Registry Explore code this weekend, so may not happen until next week.

It supports the following features:

It has the following features in progress or partially supported (some may not make the final program):
Planned Features 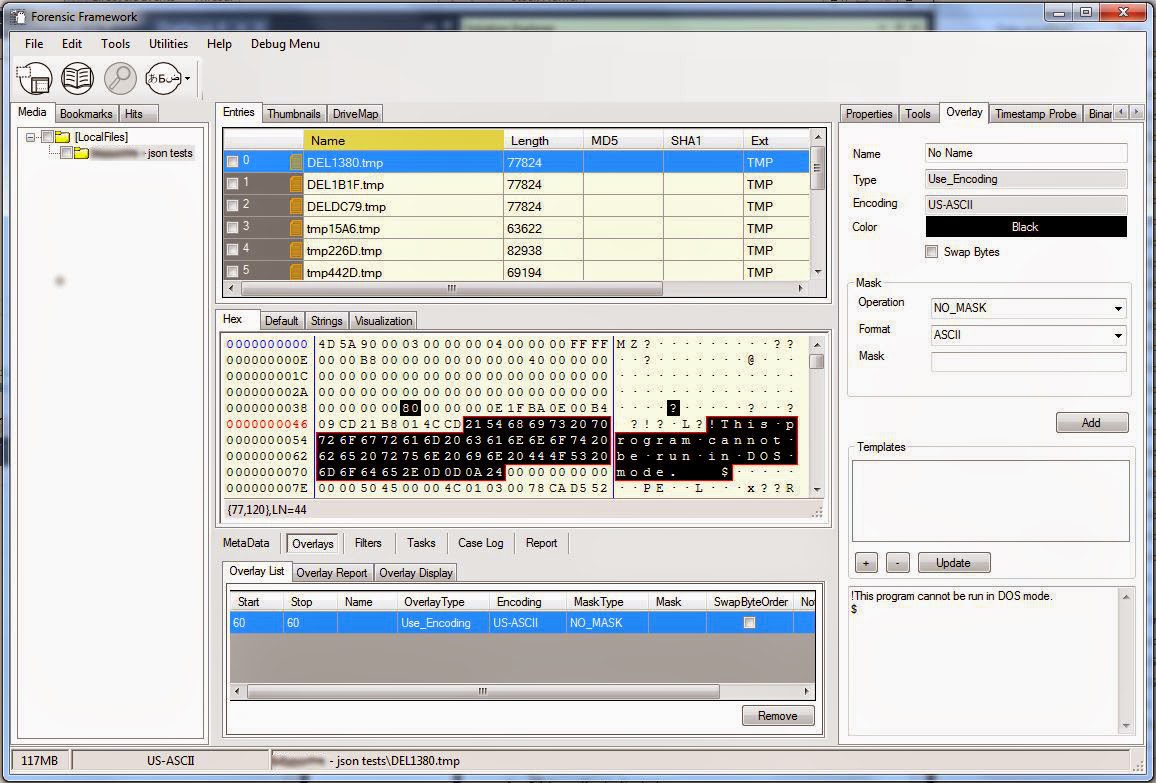 Within forensics protecting your original media is of the highest importance. Being able to verify that your write blocker is functioning is a requirement for all laboratories, office practitioners, and wandering semi-nomadic analysts.


Downside of all this is it can be fairly time consuming to perform a verification on your write blocker. For one write blocker you end up performing a minimal of two hashings of the media for the simplest verification process.  A single pass hash of a modern hard drive can take hours, multiply that by two and that machine is down for the day. If your agency or organization has a more rigorous process, then it can be a much larger time sink.

What are the solutions to making this process quicker.


Solution: Don't use a hard drive. Use flash media.


I have as part of my portable kit the following solution: 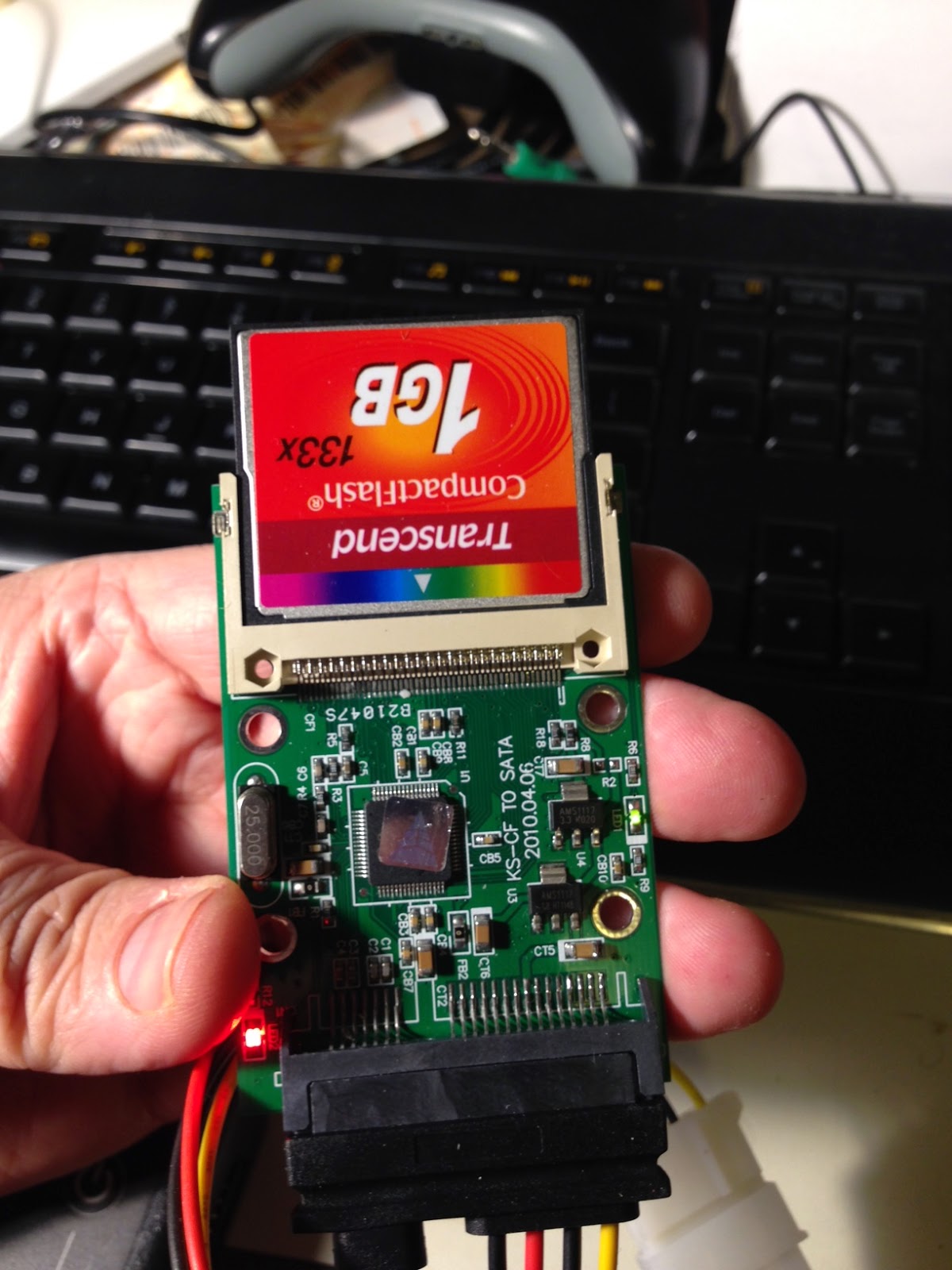 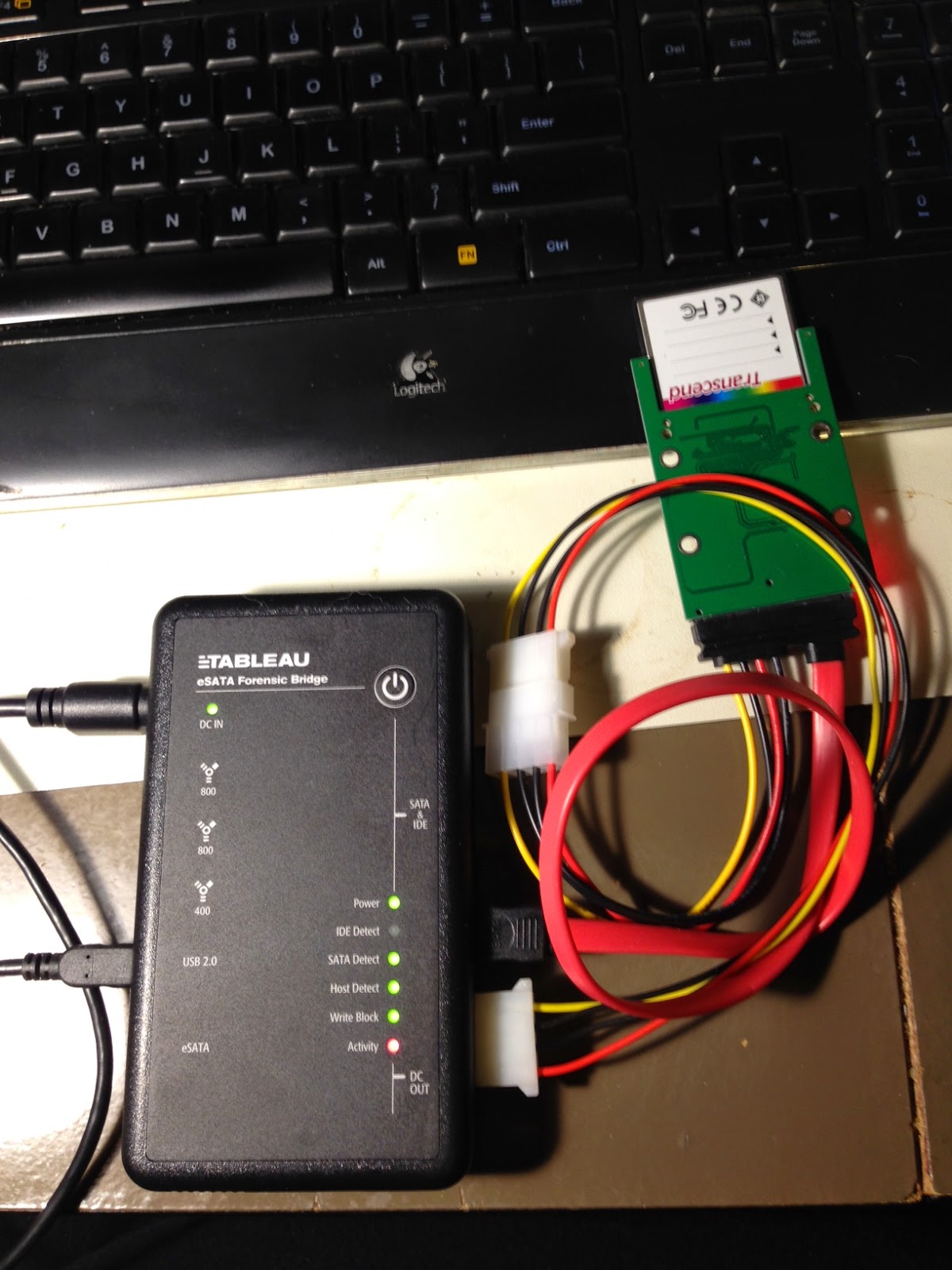 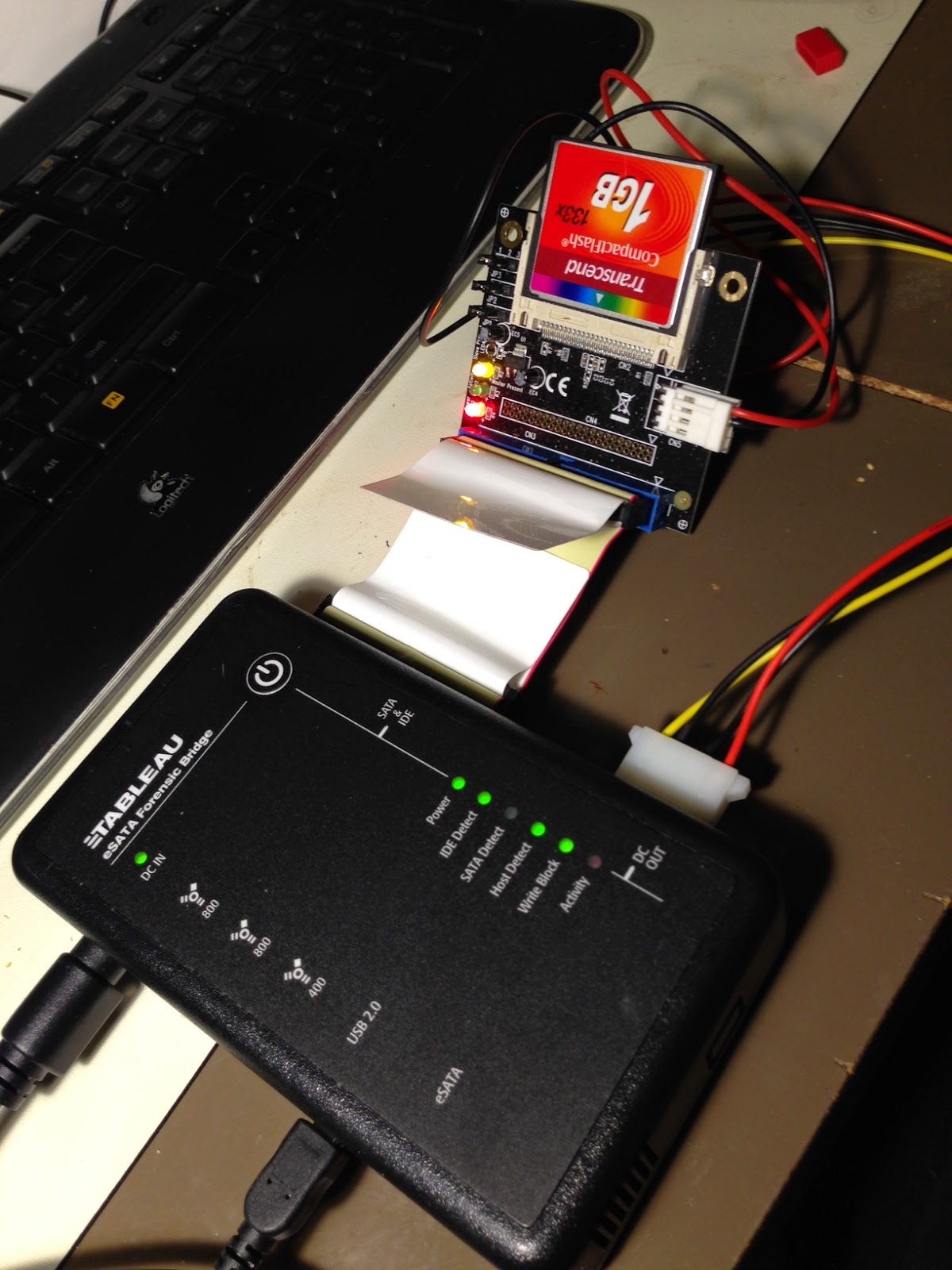 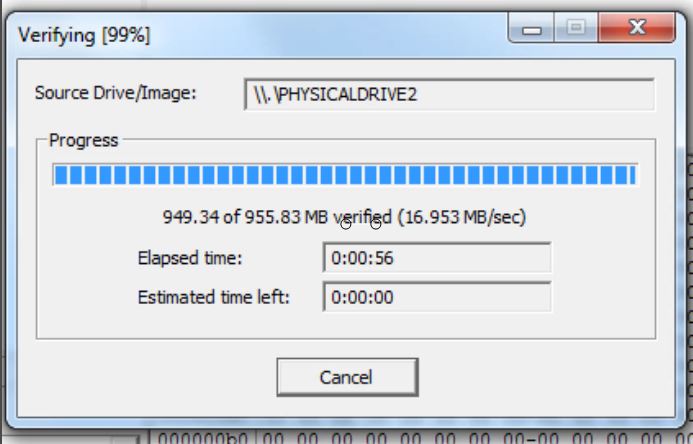 Pictured above is the elapsed time from hashing the media captured just before hitting 100%.  A 1GB card took approximately one minute to hash. If you are hashing twice, then two minutes plus some change for your attempts to change the media. If you have to verify the 10 built-in write blockers in the machines in your lab, plus the four portable write blocker kits, what was once a grueling slog through the verification process has become a simple task.

When I started to use this solution for testing I was using both compact flash media and SD card media. It worked fine at the time. Eventually, I rebuilt my kit and purchase new adapters. I started to have problems with the length of time it as taking to hash. Inexplicably this quick short procedure suddenly be came a long painful process, sometimes stalling out. So I stopped using the kit and switched back to the platter based hard drives for a while. A couple of write blocker firmware upgrades later, and a retooling of the kit, and I'm back to using it.

With the latest iteration of my kit I've gone to only using CF flash cards.  A compact flash card  is an ATA device with an ATA controller and ATA compatible electrical interface.  Commands should be simply passed through, with the adapter mainly being passive. An SD card SATA or IDE adapter has to translated the instructions from the ATA protocol/interface to the SD card protocol/interface.

As always, verify and validate your tools. There are many different adapter vendors out there, some have worked for me others have tried my patience until the product was stress tested in an aggressive manner.