NB: Disassembling a device will most likely void your warranty. If you follow any of the steps in this post you taking the chance of irreversibly damaging the morphie space pack. I would not recommend using the morphie space pack after dis-assembly, as doing so is potentially dangerous. This post is for informational purposes and does not serve a instructions for safe dis-assembly. Attempt any of the steps below at your own risk.

The Morphie Space Pack is a device used to extend both the battery life and available storage space for an iPhone. One came into my hands yesterday. It was having an issue with charging and was placed in my hands with understanding that it may not come back in the same shape. The Space Pack essentially acts like a case for the iPhone5. It has a lightning adapter which plugs into the bottom of the phone. The lightning connector acts as a pass through from a USB micro connector on the bottom exterior of the case. 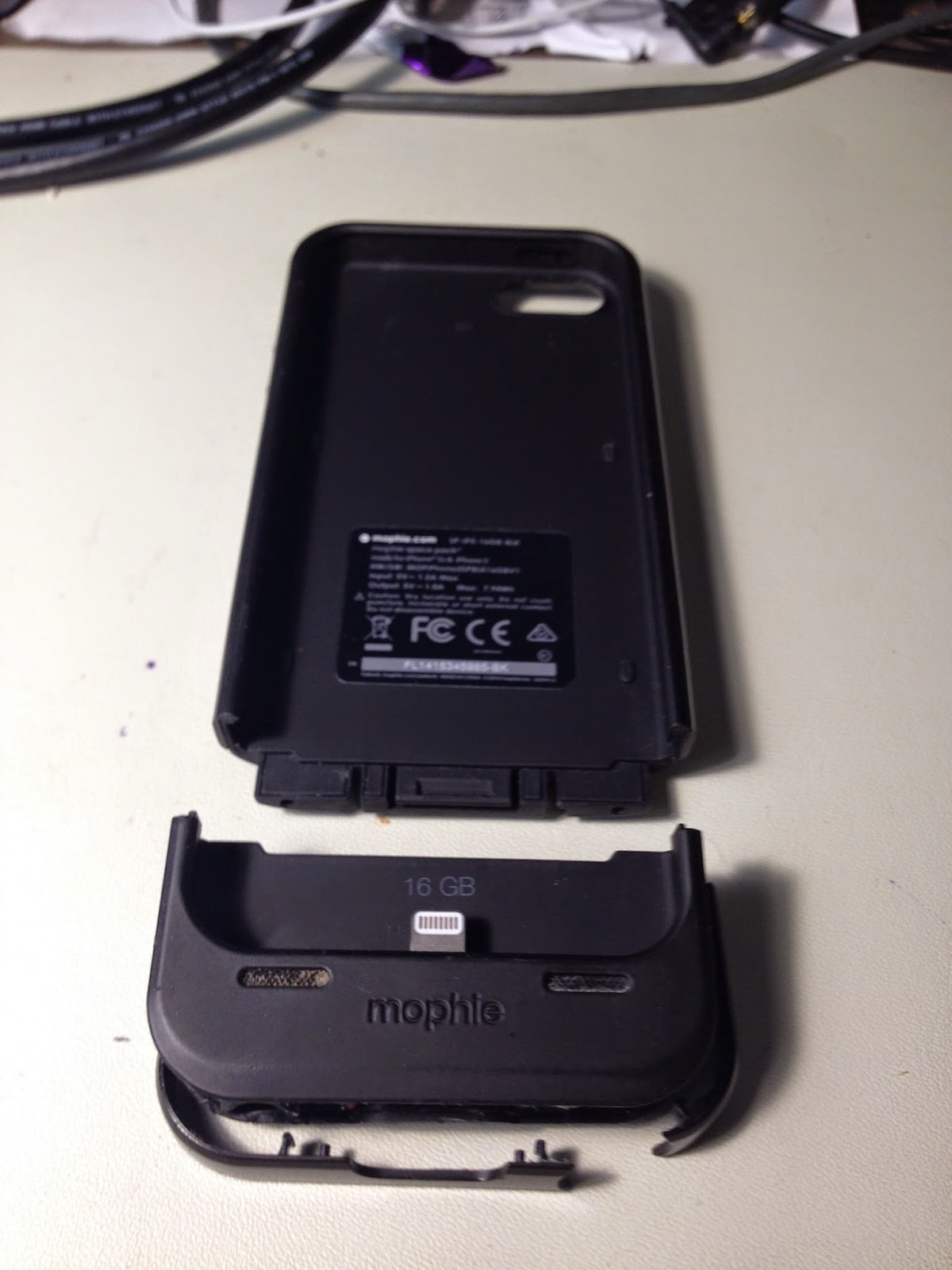 This case has 16GB built into it, but it may be easy for an investigator to overlook. Especially if the wording indicating the size of the storage has been removed from the case. In the below image you can see "16GB" screen printed just above the Lightning connector. 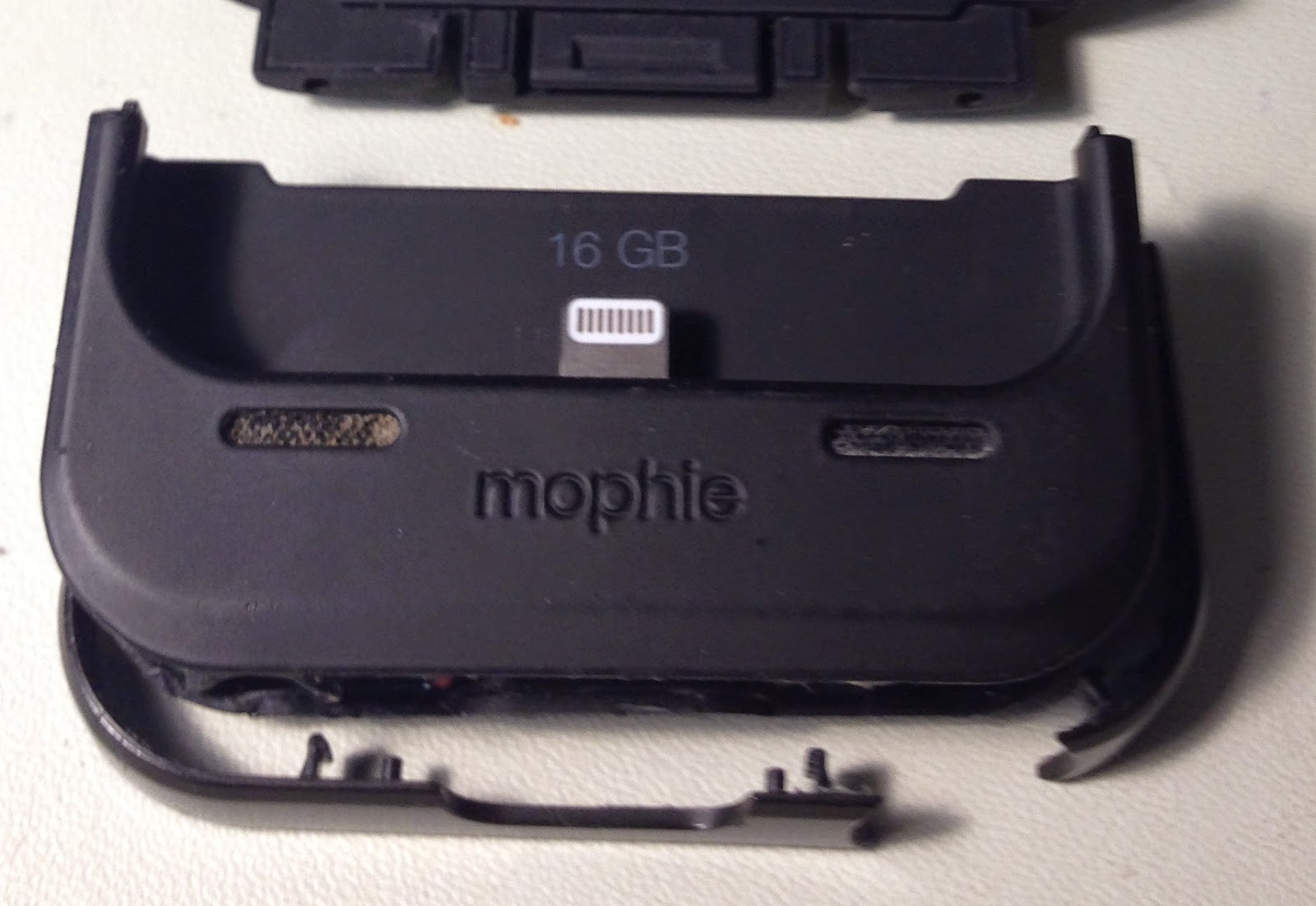 Opening
The space pack is designed as two separate pieces, which when joined encloses the phone. The bottom portion contains what would appear to be the charging circuit, switch, and storage space. The upper portion of the case contains the battery.

The picture above was taken after the dis-assembly was started. The bottom portion is two pieces of plastic sandwiched together with a two piece border holding it together. The border is attached with a double sided tape and had small plastic catches.  You can see one of the detached borders clearly in the bottom of the above image.

1. Separate the borders from the two halves - The iSesamo opening tool and dental pick was used to slowly leverage the borders loose. Gently working around the edges until it started to separate. You shouldn't force it open as there are wires connecting the top and bottom of the halves. 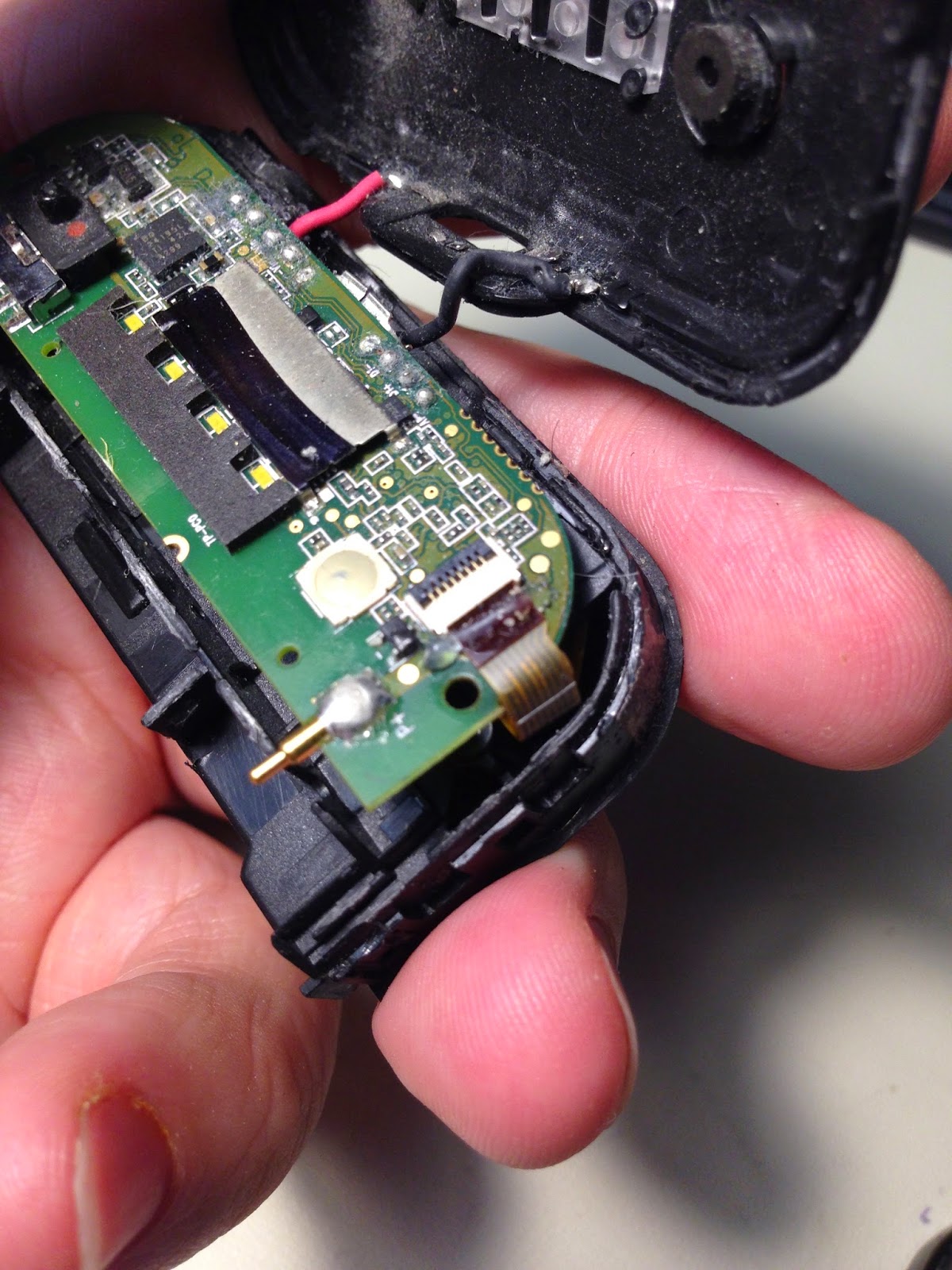 2. Remove the flex cable - The PCB (printed circuit board) is connect to the top half by a thin flex cable inserted into a ZIF socket. In the image below the ZIF socket is circled in red. 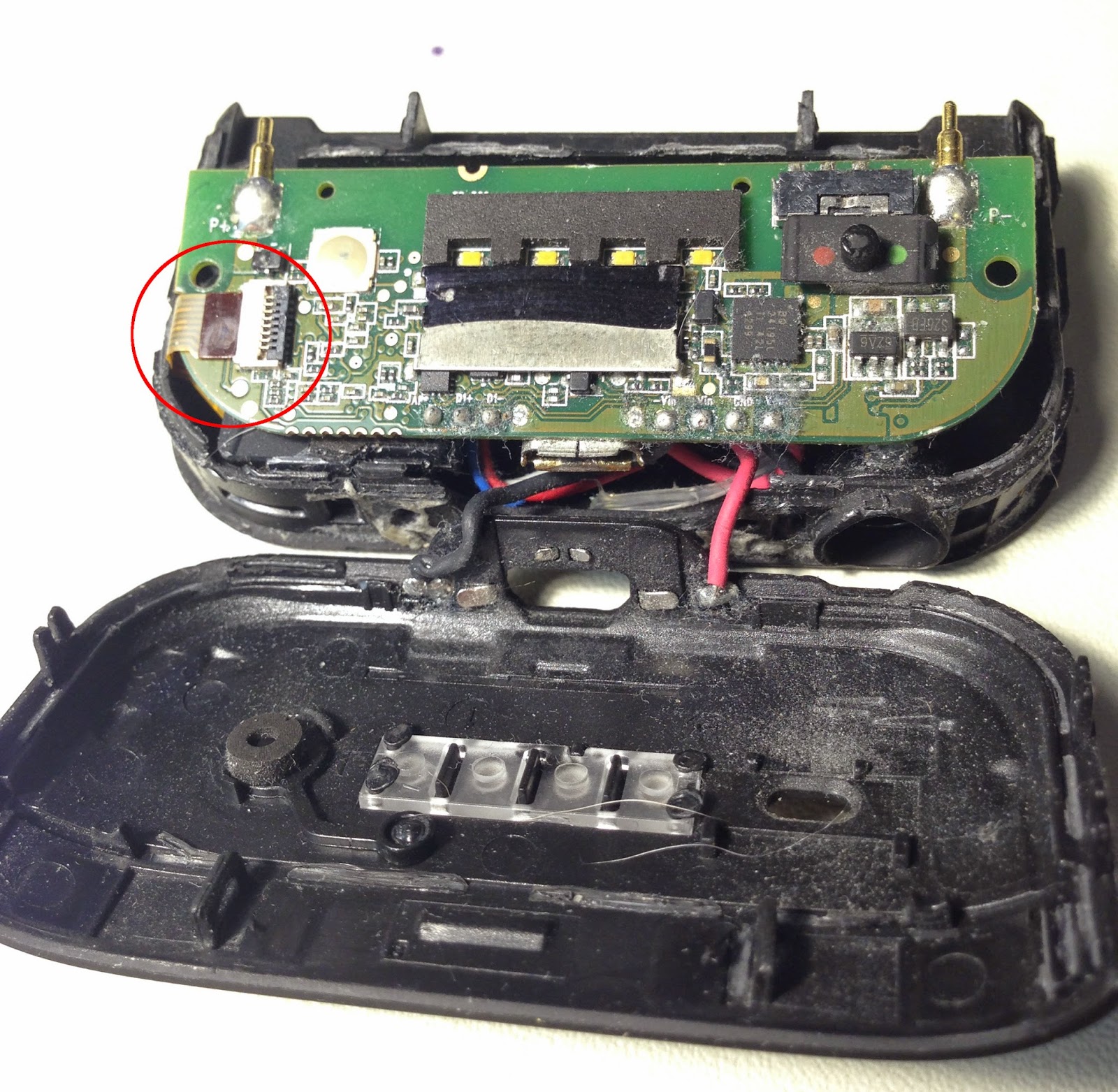 See the image below for a close up. In order to remove the ZIF socket, so you can separate the PCB from the plastic casing, you need to flip the ZIF socket toggle. The black section connected to the white section as seen below. The left side of the black section is the hinge, so lift up on the right side to release the flex cable. Be careful, the flex cable is fragile and the ZIF release can try your patience. Note: There was a thin line of glue, similar to a harder version of a glue gun glue, across the flex cable ZIF socket area. I used the dental pick to gently remove it. There was a similar line of glue between the black case and the PCB that I removed in the same way. 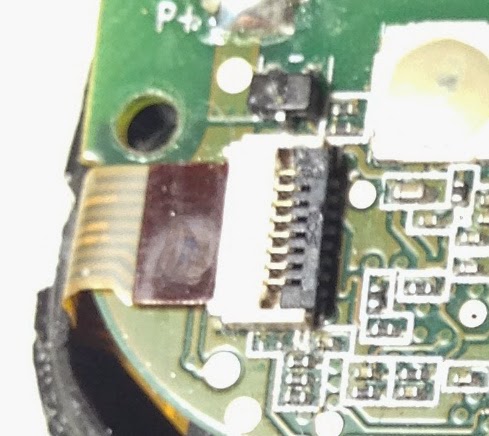 Here is a close up using a digital microscope with the hinge open and the flex cable released. 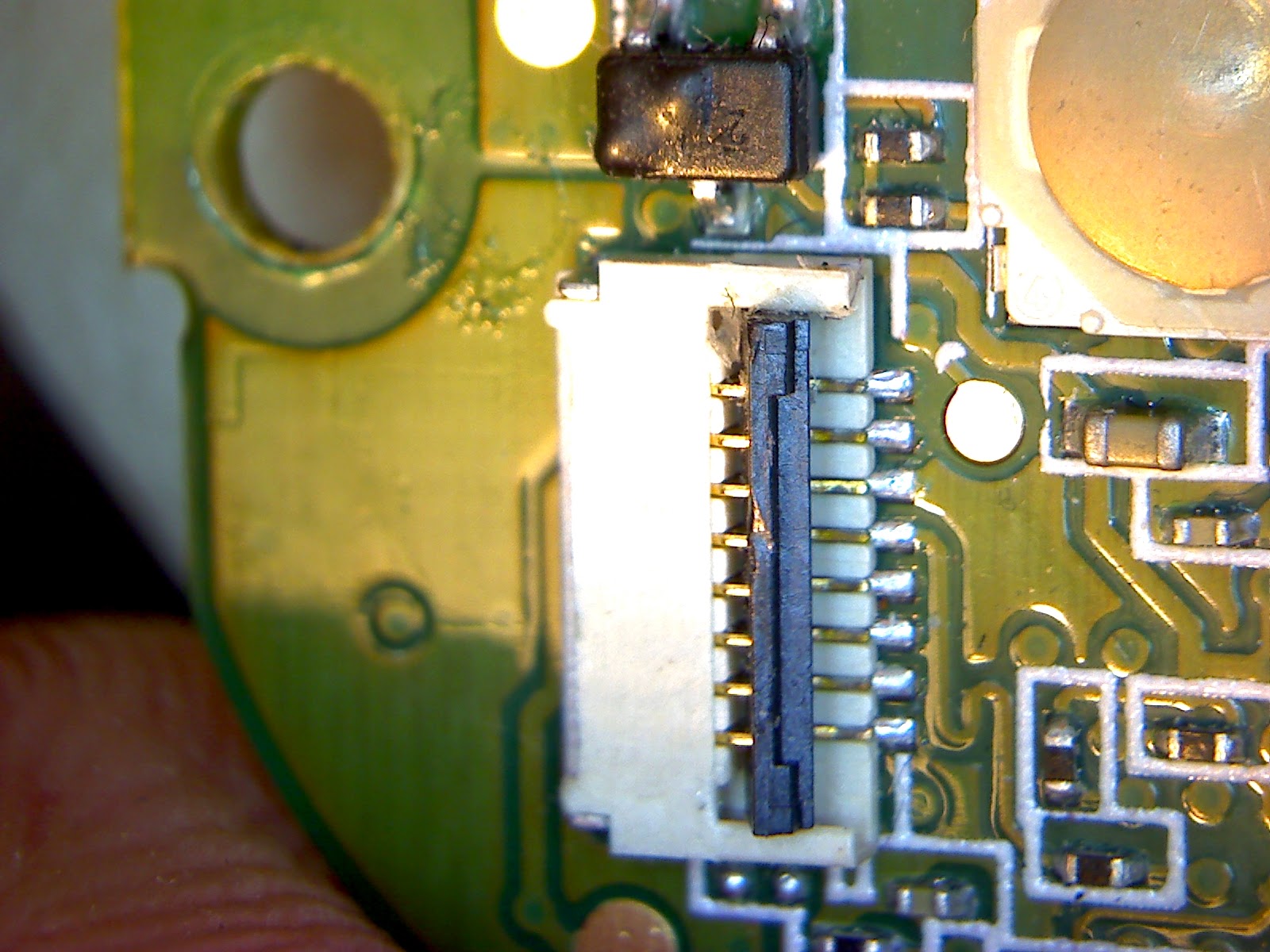 In the image below the flex cable has been release and the PCB has been flipped over. You can now see the storage, a 16GB micro SD card. 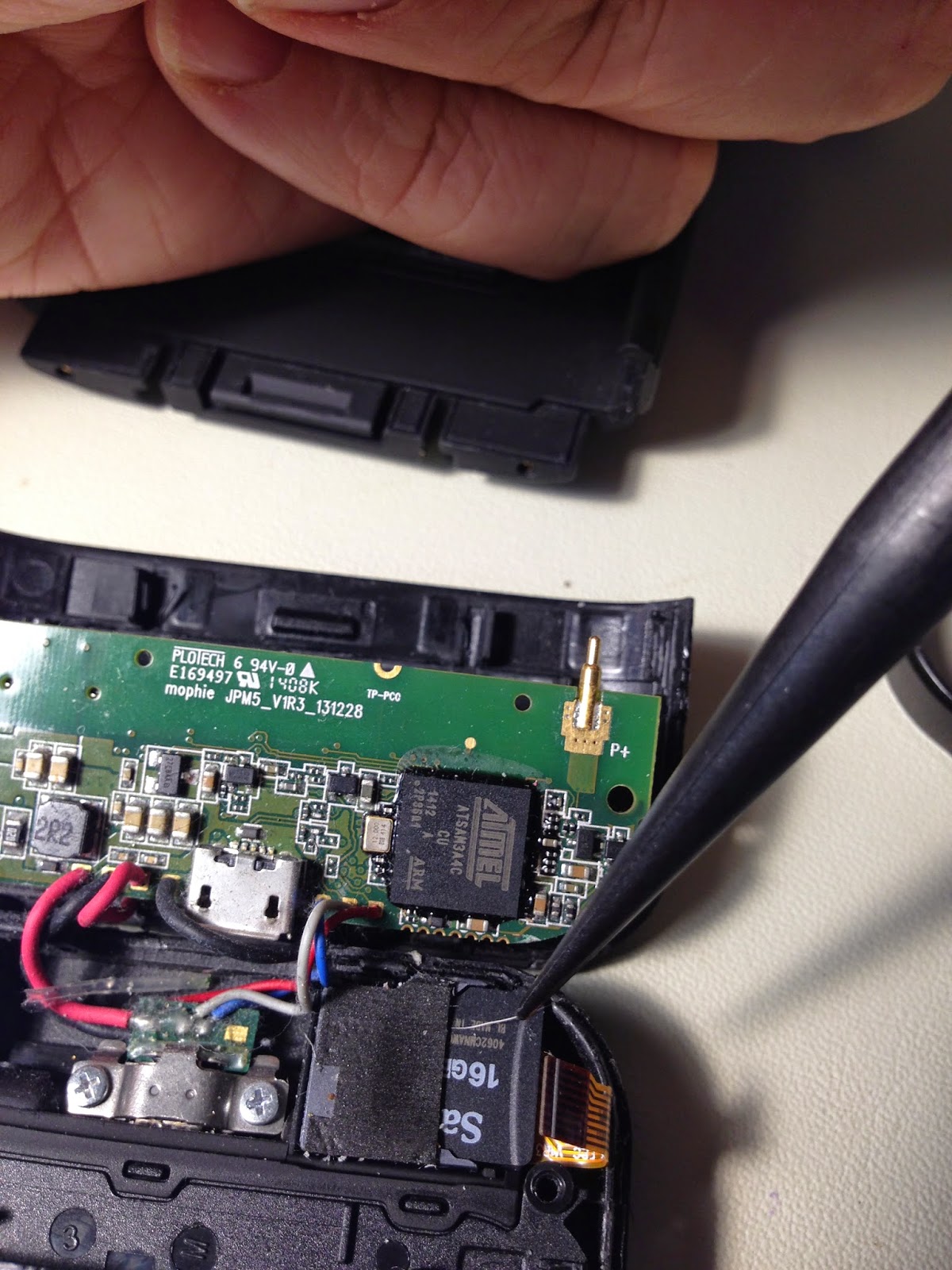 3. Detach lightening connector - To the right of the SD card, in the image above, you can see two screws which fix the lightning connector to the top piece of the shell. I remove both screws to separate the two halves. I didn't want any surprises, but it was an unnecessary step. 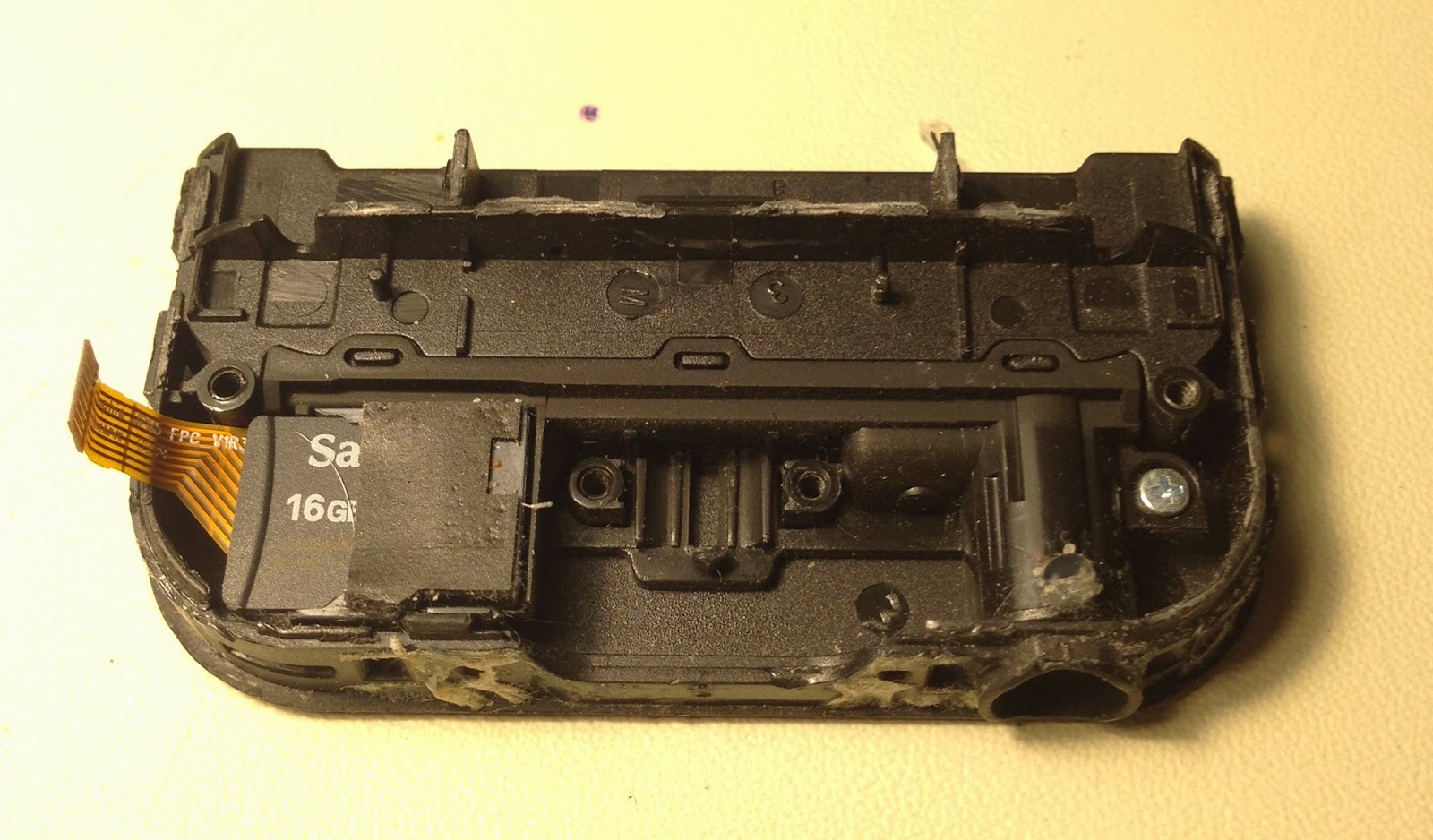 4. Access the micro SD card - The seat for the micro SD card is attached to the black plastic shell by means of a double sided tape. You can see the tape in the picture below. This is the bottom of the micro SD seat.  This is another step which you could skip. 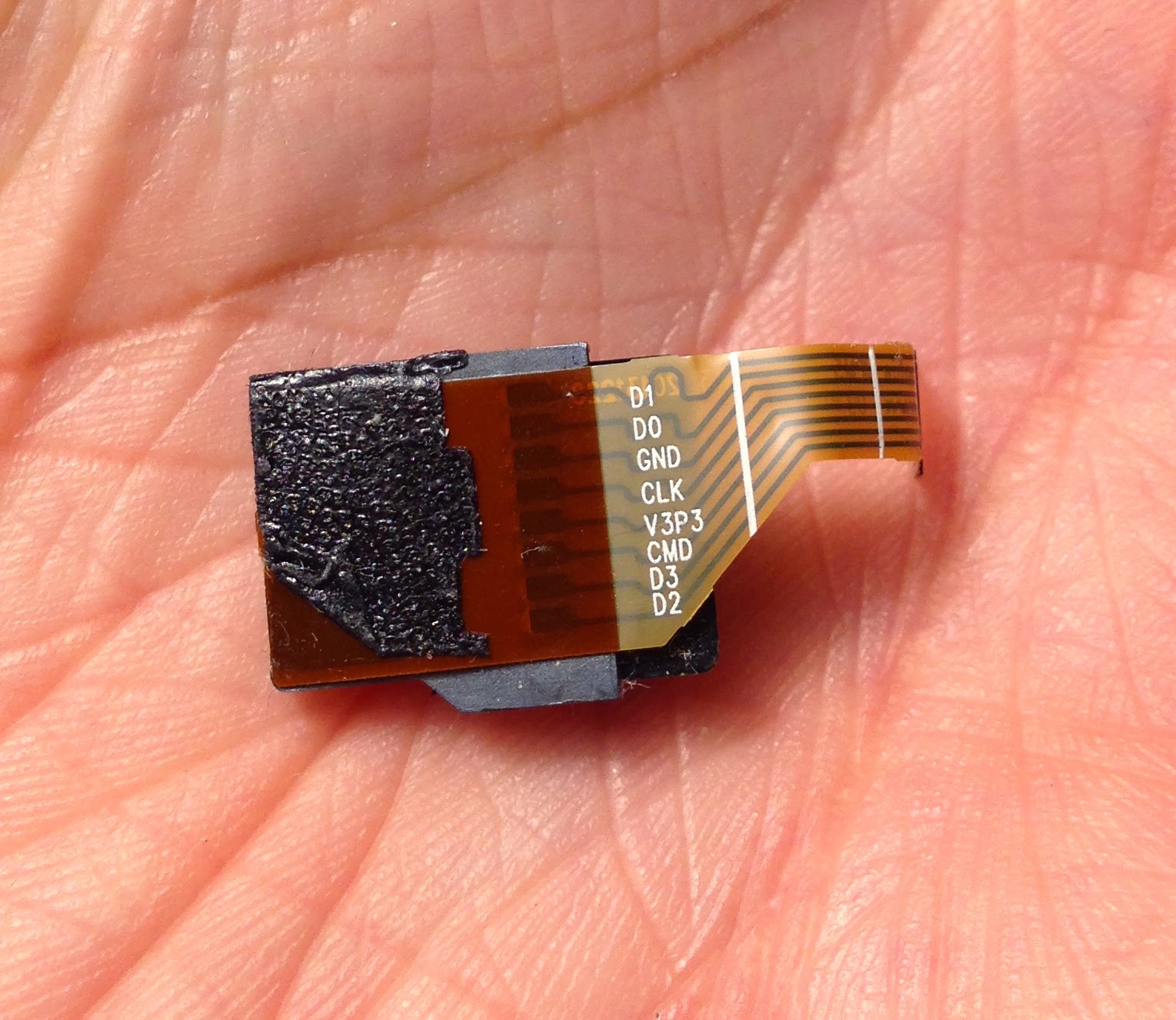 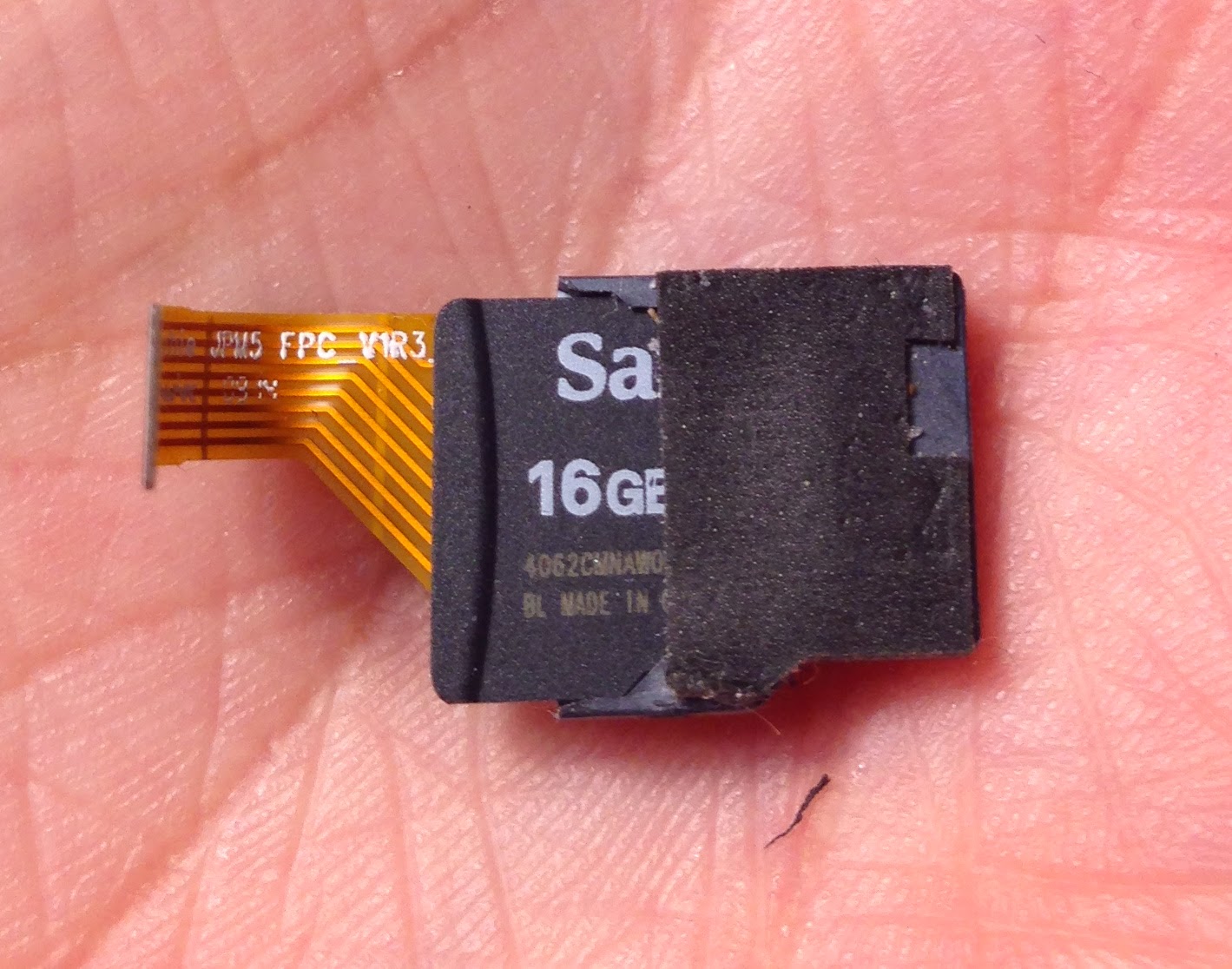 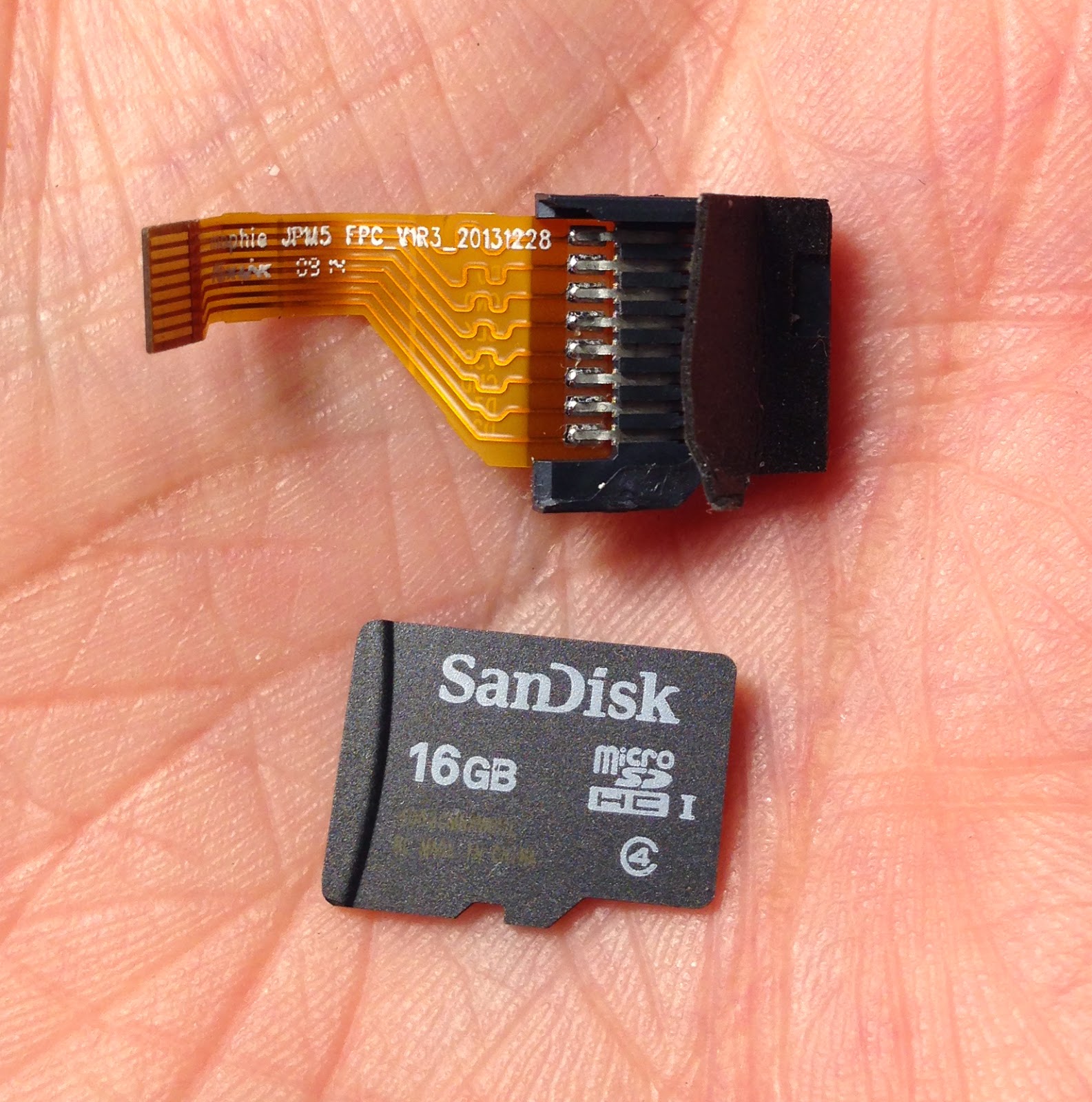 The card format is not recognized by default in a Windows machine (Win 7 Pro), nor OS X 10.9.5. Using Encase I was able to recover a FAT32 partition. If time allows I'll delve deeper into the micro SD cards format. I was able to recover pictures, movies, and other files. I also found mac droppings. 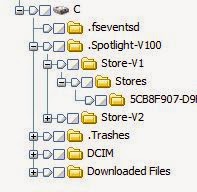 I had originally thought that the USB connection problem was due to a broken solder joint. I still think that is the problem, but I'm unsure if I can fix it. I was hoping for a through hole type connection, but as seen in the picture below it's surface mount connection. Between the other surface mounts in the area and the fact that the USB pins look like it doesn't have enough solder on it, I doubt I can get my rework equipment to do it. It won't hurt to try, but its been placed farther down my list of projects. 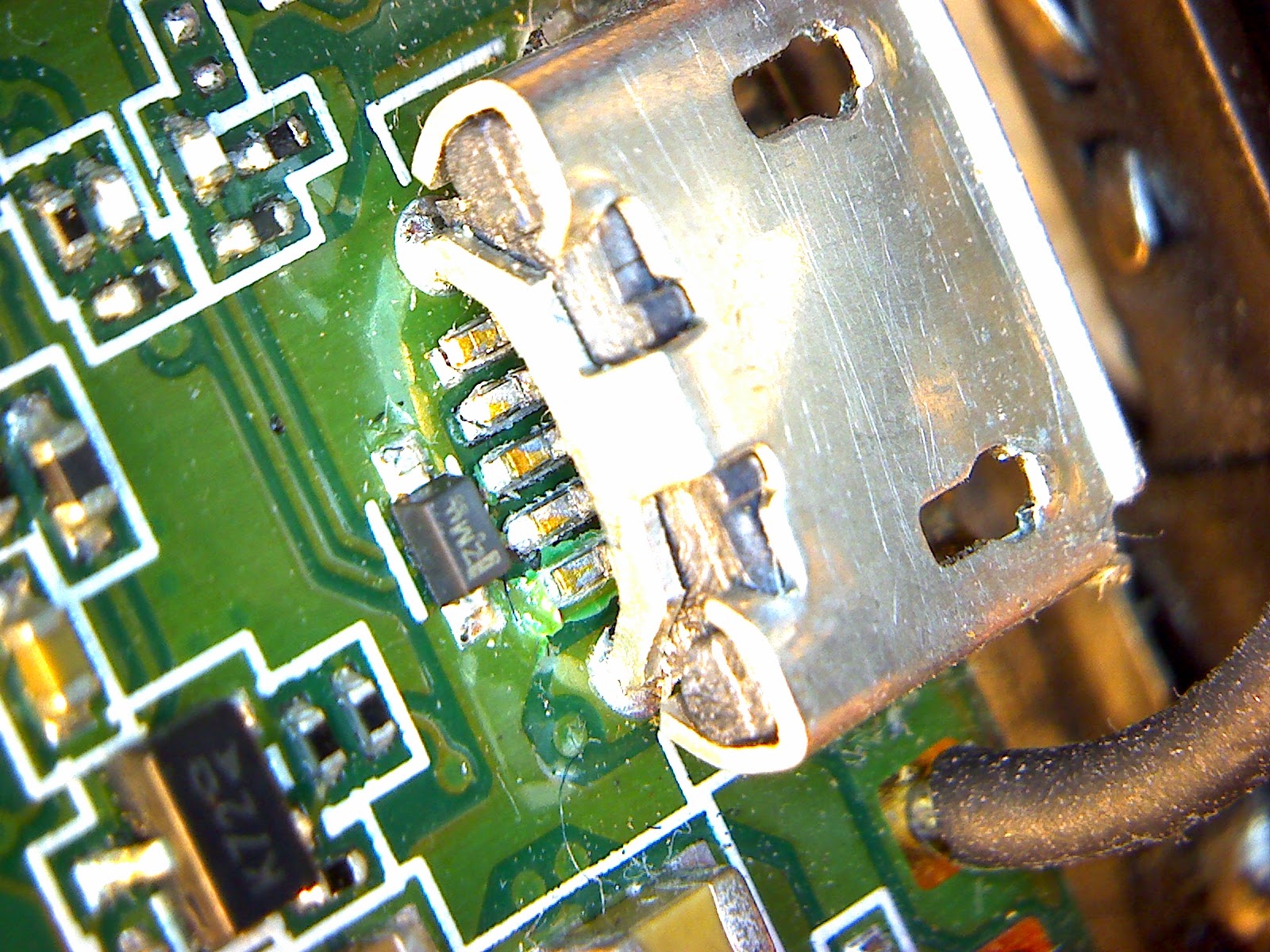 I also had the thought that the inside of the connector may have been obstructed, but from this side it looks fairly good (other than the amount of pocket lint in the picture). 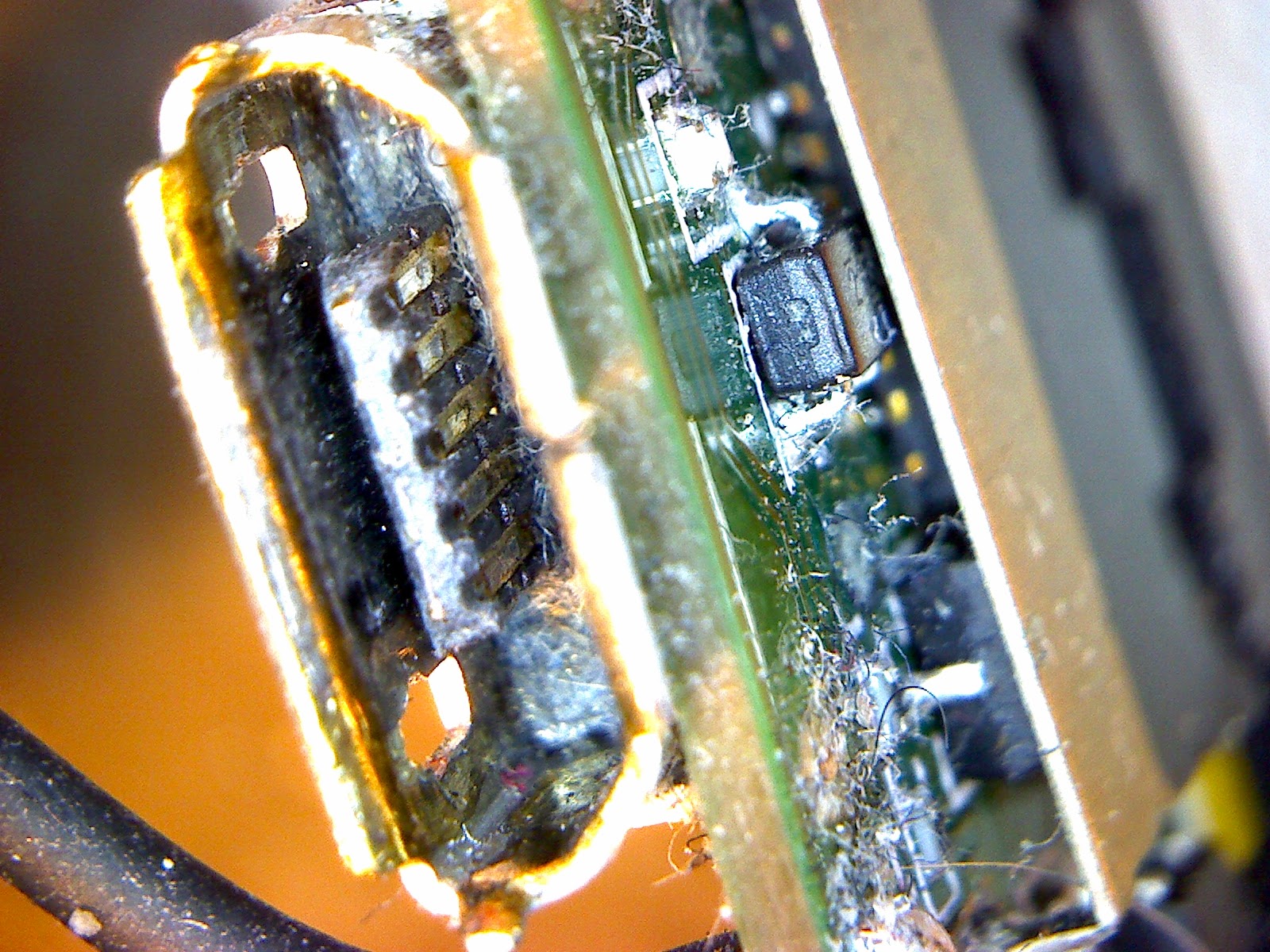 I used the following tools to void this warranty of this device : 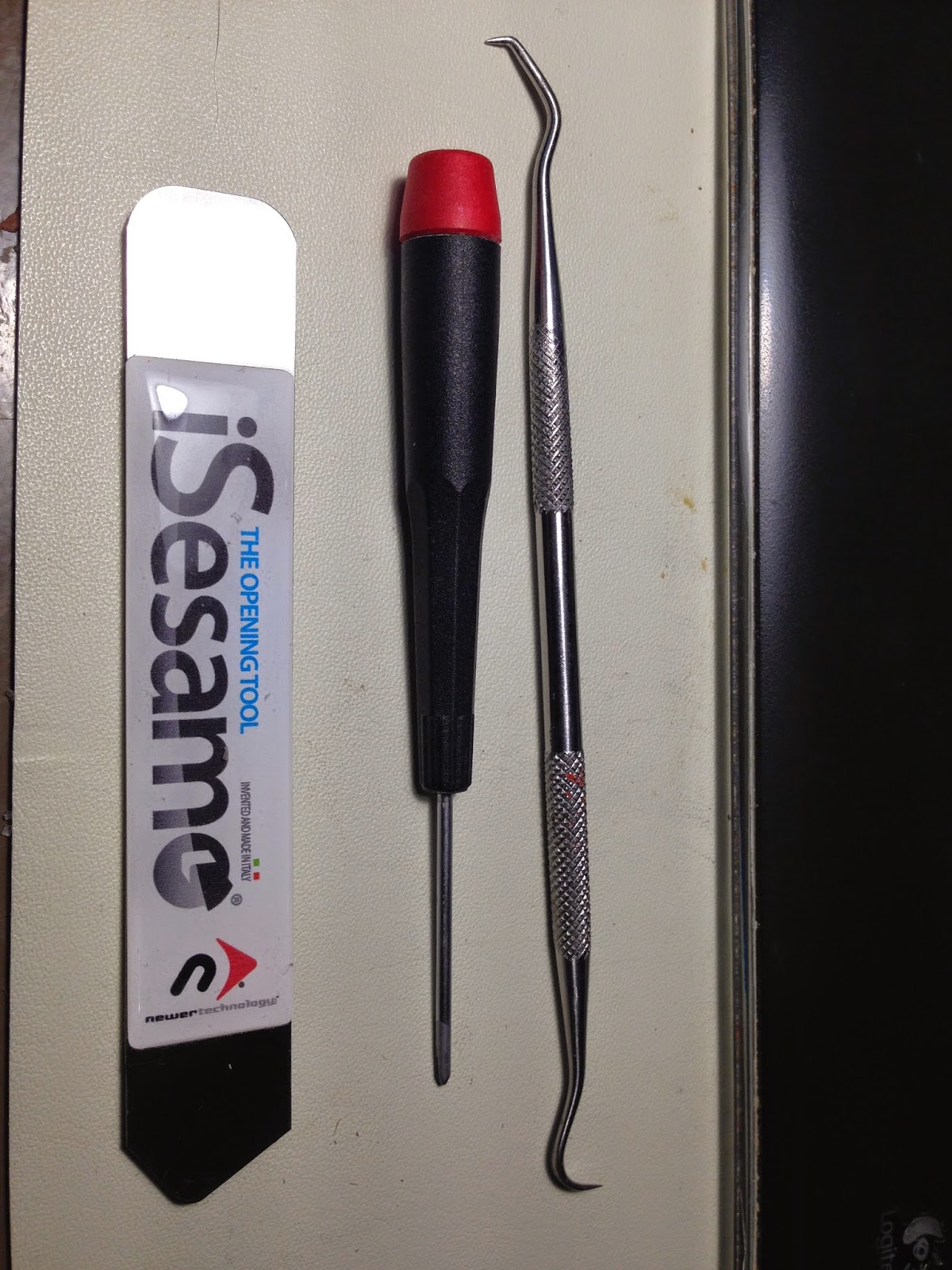